Tonight my parents, sister, and nephews came over for menorah lighting and dinner.  I was really excited to try out some new recipes.  I know Henry is somewhat picky, but my nephews (ages 6, 8.5, and 11) are super picky, and they all like totally different foods.  I knew tonight would be a tough audience.  But, since I know that my nephews sometimes don't even eat their "favorite" foods, I decided to be a little daring. 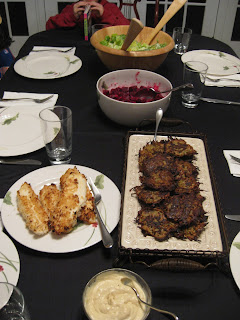 I should preface this post by saying that my usual picky critic, Henry, was not too helpful tonight.  Between starting dinner later than he usually eats, and having his big cousins and grandma around him, there was just way too much to distract him.  He ate a couple of bites of fish and a cube of beet, but he really just wanted to get out and play.  I'll hopefully have his review tomorrow after he tries it all for lunch :)


Instead of the typical fried potato latkes, I decided to bake some potato & zucchini latkes. 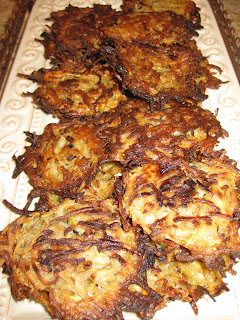 Even though I baked them, I did put a small amount of oil in the pan and put it in the oven prior to putting in the latkes so that the latkes would still get nice and crispy.  I think it worked.  My nephew Daniel (8.5) really liked them and ate about 3.  Jacob (11) was not as big a fan.  And Evan (6) got a new toy before dinner and so could not be bothered to eat.  The adults all liked them.
I also made a beet salad with feta cheese because Henry happens to really love beets.  I thought the red veggie might intrigue my nephews.  Instead, it grossed them out...not one would even touch that dish (nice try Aunt Ali...).  It was okay though...the adults pretty much polished it off. 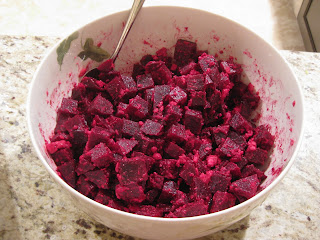 For the entree, I made baked breaded tilapia.  I breaded the full filet for the adults, and cut the fillets smaller and then breaded those for the kids.  Those were a hit...or as big of a hit as you could get with my kid crowd.  Daniel and Jacob both ate and liked them (for them, liking them was eating one fish stick).  Evan managed to take a bite while playing with his new toy - that was all he ate the entire dinner. 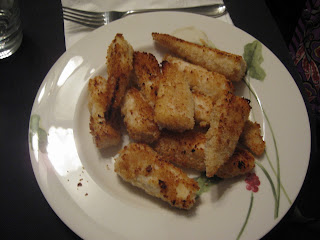 I also served a Caesar salad (romaine lettuce, croutons, and light Caesar dressing) along with the meal.  Thats a standard fave of my nephews...I think Jacob was the only one who even touched it...and that was to pick out the croutons (that should help with context of my critics!).
Here are the recipes:
Potato & Zucchini Latkes
4 potatoes, shredded (I kept the peel on)
1 large zucchini, shredded (peel on)
1 medium onion, grated
2 tsp salt
2 eggs
1/4 cup flour
3 tbsp olive oil (because I used three baking trays)
Preheat oven to 450.
Mix together potatoes, zucchini, onion, salt, eggs, and flour.
Put baking sheet with 1 tablespoon of oil on each sheet in oven for about 3 minutes.  Take baking sheets out and spray each tray with a bit of additional cooking spray, and then spoon latkes onto the sheet.  Put back in oven and bake for about 12 minutes.  Flip latkes and put back in oven for another 10 minutes or until golden brown.
Beet & Feta Salad
4 beets
1 Tbsp olive oil
2 tsps balsamic vinegar
4 ounces light feta cheese, crumbled
salt and pepper to taste
Preheat oven to 450.  Wrap each beet in foil.  Bake in oven for about 45 minutes.
Peel beets when cool enough to touch. (Tip: peel under running water to help prevent your hands from turning red).  Dice the beets and mix with the remaining ingredients.  Can serve warm or cold.
Breaded Tilapia Fingers
1/4 cup light mayonnaise
1 Tbsp dijon mustard
2 tsps prepared white horseradish
4 6-ounce tilapia filets
2 cups panko breadcrumbs
Preheat oven to 400.
Mix together mayo, mustard, and horseradish.
Cut filets into 2 ounce pieces (I cut 4 "fingers" out of each filet).  Dip each "finger" into mayo mixture, and then into the breadcrumbs.  Put on baking sheet (spray with cooking spray first), and bake for about 10-12 minutes.  Then, place under the broiler for 1-2 minutes to get golden color.  If desired, make more of the mayo mixture as a dipping sauce.
Happy and (mostly) healthy eating!
Posted by Ali at 10:08 PM